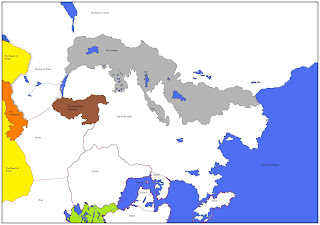 Feel free to take this map for your own campaigns and perhaps delete some of the names and add in ones of your own. I'll probably be posting more detailed descriptions or filling in more of the map later, so stay tuned! For the time being though, here's a brief overview

The Borderlands: The main campaign area, a frontier and no man's land filled with ancient ruins from ages long past. Home to various brigands, tribes of humanoids, Sylvan Elves, hermits, and even dragons.
The Southern Kingdoms: The "civilized" lands of the south, their are dozens of kingdoms and empires here, though only those near to the Borderlands are shown. The
The Barbaric North: A collection of tribelands, cutthroat kingdoms, and Jarldoms that ever seem to be ever changing in terms of political borders.
The Desert of Winds: The large western Desert said to be the home to a secretive nation of Wizards. There are hundreds of ruins left over believed to have been left behind by a once great magically advanced civilization.
The Dwarfshield Mountains: A group of medium sized Mountains. Known primarily for the presence of the last major Mountain Dwarf Strongholds. There are dozens of ruined citadels to every one stronghold still used by the dwarves.
The Cinderpeaks: A volcanic range of mountains. Fire Giants, Red Dragons, Firedrakes, and Basilisks tend to call this region home. It's said that a great lost citadel of ancient Dwarf and Wizard craftsmanship lies somewhere in these mountains, guarded by a powerful and ancient Wyrm.
The Icefangs: An Icebound set of mountains home to various races that favor cold as well as the hidden communities of the last of the Faerie and Winged Elves. Like the rest of the Borderlands, the Icefangs are believed to have plenty of ruins for would-be adventurers to explore and plunder.
The Dismal Bog: A stinking wooded Swamp home to various humanoids. Most of the ruins in the Bog are flooded or have long since been looted, but a truly lucky group of adventurers might find something of value within the darkest reaches.
The Gap of Tears: A treacherous and rocky area that had perhaps once been a massive cavern in the underdark thousands of years ago before it had collapsed resulting in the rock-strewn land that it is today. This area is home to a variety of strange and bizarre monsters that would more than happily add an adventurer or two to their diet. This is also a favored stomping ground for certain wizards wishing to experiment with magical crossbreeding(as who would notice the long-eared killer aardvarks amongst the other strange monstrosities wandering the land). Also home to various undead creatures.
The Sea of Dragons: A great ocean where the vast majority of major commerce takes place. It's said that somewhere there's an island surrounded by storms that can only be reached by the dragons where they breed, die, and hold court amongst themselves. Most dismiss this as an old sailor's tale. Beneath the waves various tribes of Sahuagin, Sea Elves, Merfolk, and even stranger creatures hold sway.
Posted by 2eDM at 12:07 PM