Pictures from a Mushroom Forest

This has been a pretty hectic week. But in what little downtime I've actually had, I've been spending time re-exploring Zangarmarsh, Deepholm's Needlerock Chasm and the Crimson Expanse, and the fungus area of Ahn'kahet.
By and large, Zangarmarsh was the best done of the areas. The other three areas didn't seem as well put together. I was mostly looking for mushroom/plant variety as well as types of creatures living there. Ahn'kahet is excusable as it's in a "dungeon instance" while the Cataclysm areas were a fine description of how half assed the entire xpac is.
I traveled around exploring on my main character and these are a few of the pictures I took: 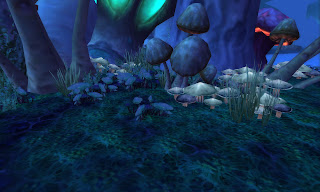 Above is a picture of the smaller types of fungi commonly found in Zangarmarsh, as well as the ferns, mosses, and long grasses. 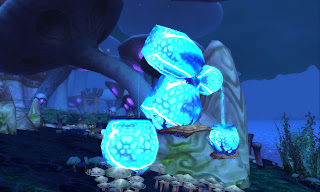 Found these growing mostly by the various lakes in Zangarmarsh.  They seem to be like the fungal equivalent of a pitcher plant. 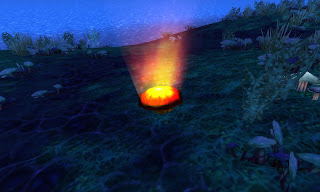 Glowcaps. A lot rarer than they used to be, Glowcaps are used as a currency when dealing with the fungus men of Zangarmarsh(the Sporelings). 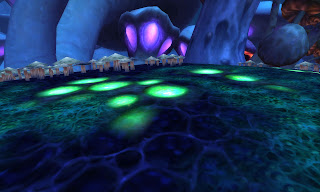 Found these glowing green spots near Umbrafen Village. They were also somewhat prevalent near Feralfen village. Not sure if they're supposed to be a type of glowing moss, or a sign that the Lost Ones(degenerated swamp dwelling dranei) have been farming the various fungi types. 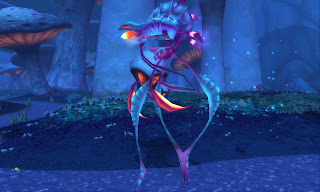 One of the more common and colorful predators in the marsh, a Fen Stider. They are one of the different types of creatures called spore walkers.

That's all for today, as I know this post is going to take forever to load as is. Next time I'll show more pictures, or maybe offer a few descriptions for my Mushroom Forest sandbox.
Posted by 2eDM at 12:35 AM