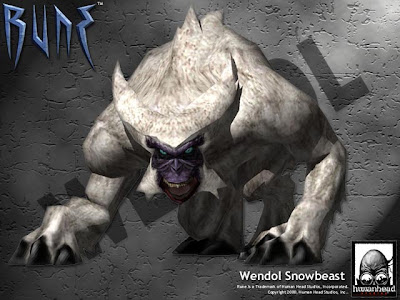 A Wendol is master of the cold lands, even giants and dragons think twice before tangling with these creatures. In form, the Wendol appear to be a cross between wolves, polar bears, and gorillas. In temperament, they make wolverines, and badgers seem friendly. If Wendol have a language(doubtful), they have never tried to communicate with any other race(that we're aware of).

Combat: Regardless of whether or not Wendol are in a group or alone, they fight the same way. First they unleash a howl that can make even the strongest of warriors who hear it soil their armor and run in terror for 3 turns unless he makes a save vs. spell. Next the wendol charges directly into combat, Often leaping directing into the thickest knot of enemies, headless of its own safety. This charge is lightning fast, giving it a -2 bonus on initiative, +2 to attack rolls, and allowing it to make all 3 of its natural attacks in that round. Most animals, if you injure them, are more likely to run away than they are to stand and fight. Not so with the Wendol. Injure a Wendol and all you've succeeded in doing is making it mad. For every 3 points of damage done to the wendol it gains a +1 cumulative bonus to attack and damage, to a maximum bonus of +5. This state of berserker rage will last until either all non-wendols in the area are dead or are unreachable for at least 1 turn. A Wendol is naturally immune to spells that cause fear or charm-like effects.

Habitat/Society: Wendol normally travel alone, but all wendol belong to packs of up to sixteen individuals. Wendol hierarchy is non-existant in these packs, where the strongest(usually a female) rules. Only this alpha female is allowed to breed. Very rarely, somewhat psychotic individuals(rock goblins for instance) have kept lone Wendol as guardian monsters or for sport. Such an act is risky however, as a Wendol is actually MORE likely to attack its captor than it is to attack any other target. Young Wendol are born live, and full able to consume meat within a month of birth. They only have 1 HD at this point, but gain an additional HD every month until fully grown.

Ecology: Wendol will consume any type of meat, but seem to prefer the flesh of humans, giants, and dwarves. Wendol have no natural predators beyond humans of barbaric tribes who sometimes slay a wendol and wear its skin as a sign of strength. Such an act is truly foolhardy as the surviving members of the slain wendol's pack have been known to utterly destroy even large towns in retribution.
Posted by 2eDM at 7:05 PM