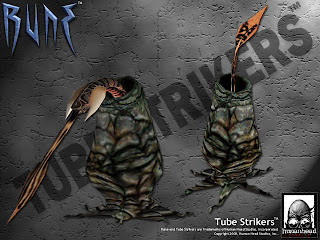 At first glance a Tube striker appears to be a subterranean plant, with a hard stony bulb, from which protrudes a strange, gently waving yellow and brown stem and leaf. When one draws close however, a vaguely reptilian sounding hiss accompanies the retraction of the "stem and a good portion of the "leaf."

Combat: A Tube Striker attacks with lightning fast jabs, using the "leaf" which is actually a bladed sensory/reproductive organ to impale its foes like a harpoon. The "stem" is actually retractable into the creature's bone-bladed head. which sits atop a vaguely serpentine "neck." The Tube Striker is completely blind, but can sense prey accurately up to 10 feet away. There's a one-in-three chance that when a Tube Striker hits, instead of doing damage it will instead thrash about with its prey, completely disorienting the creature, before throwing it in a random direction(or possibly not so random), where the creature will take falling damage. The creature may instead grab an item being held by the character(50/50 chance of the creature grabbing a person or item). The "Tube" the creature hides in is impenetrable(hence AC -10). The AC 5 refers to the much softer reptilian and plant-like parts of the creature's body.

Habitat/Society: Tube Strikers have no known society whatsoever. Despite their relative abundance in the underdark, very little is known about these creatures. It's believed that they have 2 methods of reproduction. The first method is parthenogenic, in which the parent gives "birth" to buds which grow on the root-anchors. These buds are capable of movement once they splint off from the parent. However, this movement is still effectively 0, since it's measured in terms of feet per year. After about 1-2 years, the bud lays down its anchor-roots and does not move again. The second methods is spawning, in which the hermaphroditic Tube Strikers release egg-spores and sperm-spores into the air. The fertilized eggs, if they land in an appropriate area, first grow anchor roots before growing into a full tube striker.

Ecology: Tube Strikers feed on anything they can catch. This usually includes lizards, Rock Goblins, bats, and any slow-witted adventurers they can manage to catch. No other race hunts these creatures for food, but some primitive races attack the creatures for their "stem and leaf" organs which stiffen once severed, creating a primitive handaxe or club.
Posted by 2eDM at 3:09 PM