Equipment: Dirty clothes, Very thick leather apron, basic farming implements(never been used), Forge, Blacksmithing tools
Languages: Orc, Common, Ogre
Background:
Tharg is an orc dwelling in a human community. A band of adventurers had attacked his tribe, and being unusually bright, Tharg was able to tell a convincing enough lie that he was spared. He told the adventurers that he was a half orc, his mother having been a slave of the tribe, and that he had had nothing to do with the raids on the villages that the party was avenging. The adventuring band was rather surprised when his story didn't cause their Detect Lie spell to find anything inherently false. What Tharg failed to mention is that his other half is orc too, all females are slaves in his tribe, and the reason he wasn't involved with the raids is that because he was the tribe's smith, which is barely a step above slave. The adventuring band took him away from the cave complex of his tribe and to a local village that had lost its smith to the raiding. Tharg at first worked in fear of his life, believing he had merely traded orcish taskmasters for humans. When they started offering money instead of maggoty, half eaten, carcasses, Tharg was understandably shocked, though his relief and amazement were soon replaced by greed. Ever since, Tharg has been living comfortably, charging fees that are just a bit higher than average, but well worth the price given Tharg's immense skill.
Posted by 2eDM at 12:16 AM No comments:

Attack of the Low-res minis! 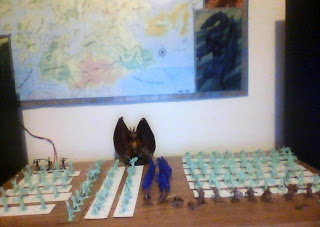 Ok, as promised. Here's a pic of the minis. Sadly my digital camera's cord is still MIA so I had to use my laptop's webcam, so detail is nigh non-existant. What you're looking at is a small army of 128 1/72 scale vikings, and one D&D Miniatures "Huge" Red Dragon. Also apparently my stereo system, and part of the map for the Fifth Age Dragonlance game because I needed to put up SOMETHING, and all I own are maps(so that's what goes up).
Not entirely certain I'm going to paint these guys while I'm still in the states. Mostly because I'm not sure I want to spend the money over here, then find out, for whatever reason, the paints are not allowed through customs when it comes time for me to finally move to Australia. (The continent that is in time out in the bottom corner of the map. It knows what it did!)
Posted by 2eDM at 8:31 AM No comments:

My Dragon is Bigger than Your Dragon


Today I received a package of a sizable horde of Dark Ages vikings/franks from Mike over at Swords and Dorkery. To give myself a better sense of scale, I brought out my "Huge" Red Dragon(advertised as being used as a Young Adult, but capable of being used to represent Adults and Mature adults as well b/c of the size of the base) and stuck it next to the horde.
"Cool" thought I, "this must end up being the equivalent of an older dragon."
Wanting to find out which age category, I marched off to the kitchen in search of some string. Upon returning, I took measurements of tail and body length, threading and taping when necessary to get as close to exact as I could. Then I flipped open my 2nd edition MM.
2nd edition dragons are apparently bigger than 3rd edition ones, because even when looking at as a 1/72 scale model, it rates only as 2nd age category(Young).
I hope to have pictures of the newly acquired minis tomorrow(just have to find the cord that allows me to get pics off my cheap digital camera, failing that, I'll have to use my Laptop's webcam).
Posted by 2eDM at 4:06 PM No comments:

I would not normally do this, but I guess I do kinda owe the goddess of spring, fertility, peace, and other things I would normally try to stab, eat, or vomit at the thought of. Loki does teach his kids to honor our debts, after all.

Happy Eostre, Ostara, Eoster, Easter, Passover, Noblegarden, Soggy Noodle day, or whatever else you might be celebrating. 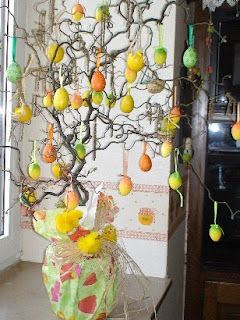 Equipment: Dirty Clerical Vestments, Old Mildewed Holy book that he can't read that has seen at least one bookworm infestation in its long life.
Languages: Common
Background:
Methyr is the son of a local farmer that died from the plague that swept through almost 20 years ago. The same plague also claimed the local priest who had tended to the poor in the area. Because of his ministrations and prayers, Methyr believed he had gotten better himself. Given that nobody else in the village could read either(and nobody really wanted the job), Methyr took up the role of priest for his village.
Methyr blames himself for the death of the village priest, and believes that secretly, so do many of the village-folk. Thus, he tries very hard to try to make up for what he believes is his sin. Though Methyr is incapable of actual reading, he believes he's pieced together some of the meaning of his holy book, and none of the villagers can ever recall having heard such stirring sermon, even from the previous priest.
Methyr takes care of the local shrine as best he can, but given his personal lack of funds, it's little more than a drafty hut in which sits a small tarnished silver mace upon an altar that has seen better days. If the village were ever in true danger, Methyr would use this mace to defend the villagers, trusting in the will of his god.
Posted by 2eDM at 3:25 PM No comments:

In an attempt to get myself back into actually posting things on here rather than giving in to my normal extreme misanthropic tendencies, I'm going to start publishing at least 1 NPC or PC each friday.

Ability Scores:
Strength: 12
Dexterity: 8
Constitution: 14
Intelligence:  13
Wisdom: 10
Charisma: 15
Movement: 12
Savings Throws:
Poison, Paralyzation, & Death Magic: 14
Rods, Staves, & Wands: 16
Petrification & Polymorph: 15
Breath Weapon: 17
Spell: 17
Armor Class: 4(Chainmail + Shield)
Hit Points: 7
THAC0: 20
Damage: Longsword(1d8/1d12), Dagger(1d4/1d3), Sling(1d4/1d4), Military Fork(1d8/2d4)
Equipment: Backpack, Bandages(5), Bedroll, Oil Flask(1), Cooking Pot, Dry Rations(2 weeks), 50’ Hemp Rope, Large Sack(3), Tinderbox, Torches(5), Wineskin, Pouch with 2 gp
Languages: Common, Hobgoblin, Ogre
Background:
Tiras was born to a poor farming family on the Border Frontier.  A wizard of some repute made the fortified town his home as well, coercing the humans to obey his whims with an army of humanoids.
At Age 10, unable to support his family, Tiras’ father sold Tiras and his elder brother into slavery to the Hobgoblin soldiers of the wizard. The hobgoblins put Tiras to work as a camp follower.
At Age 13, the town was attacked by an unusually large band of ogres. Tiras led the other slaves in a counter attack against the Ogres, a brutal affair leaving most dead, and Tiras’ leg broken in many places. The daring of the boy impressed his hobgoblin masters and they began teaching the boy Hobgoblin warfare techniques.
At Age 14, Tiras was considered a minor courier, acting as  a go-between for the Hobgoblins and their Wizard benefactor. While attending to the wizard, the remnants of the Ogre band caught the wizard unawares, killing him with a well placed boulder throw.
For the next year The Ogres laid siege to the town. The other humans of the town were slaughtered by the hobgoblins for food during the siege, and fleeing peasants and hobgoblins both were slain by ogres beyond the walls.
Tiras was able to escape the ogre siege and their eventual victory, and fled towards what he hoped was more civilized lands. With little in the way of marketable skills, he now lives as a mercenary and brigand.
Posted by 2eDM at 10:32 AM No comments: